My Encounters With Those in Film

I have always been trying to meet people from film in one form or another since I truly appreciated the art of film.  In this entry I will be mentioning all the times that I have encountered those from the film world, either through webchats or meeting them face to face. Every time that I have a new encounter with someone from film I will upload whatever I can. To that end lets dive in.
My first encounter from the film world was when I participated in a webchat with Chloe Grace Moretz and Kodi Smit-McPhee at the London premiere of Let Me In on October 14th 2010. My question was one of those asked, directed at Chloe and her face when she is told my question is something that will stay in my head forever. The webchat video is below and my question is asked at 08:50 into the video.

My second encounter from the film world occurred when I met Simon Pegg at a signing of his autobiography Nerd Do Well at the Liverpool One Waterstones on October 21st 2010. When I met Pegg I asked him if there would ever be a Spaced reunion, he told me that their wouldn't be on the TV but the cast of Spaced do meet up and go to the pub whenever they are in London. Below is a picture of the book signed by Simon Pegg. 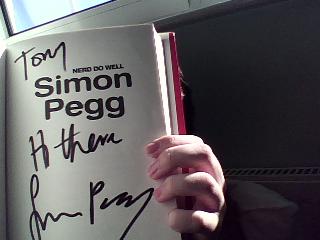 Thirdly, on April 8th 2011, I took part in a webchat with Duncan Jones, the director of Moon and Source Code. I asked him the question What is your view on 3D in film now, a gimmick or something long lasting? Duncan Jones replied with "I think 3D can be used very effectively, but you have to plan SO much, so far ahead of time. There are some serious limitations on how you move the camera, and how you edit the film, when you're working in 3D. And the question has to be whether those limitations fit the story you're trying to tell, or whether you're making a rod for your own back by doing it. I'm not sure how many projects can afford the pre-production that would be needed to know ahead of time that 3D is absolutely the right way to go. Again, I give props to Christopher Nolan for choosing to use aspect ratio and IMAX resolutions as an alternative to 3D to give his action scenes more impact." Which was a brilliant answer.
Posted by TonyCoog at 17:01

Now a member of LAMB